With a little help from a fellow ham, I’ve finally ventured into the world of DMR digital amateur radio. That’s one of the wonderful things about this hobby: there’s almost always a fellow ham who has knowledge to share in a particular area (and has already discovered and resolved many of the annoying technical issues.) 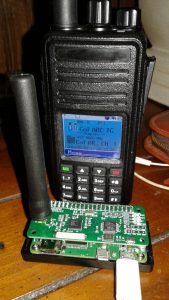 TYT MD-380G DMR radio and the DMR hotspot device. So much capability in such a tiny package.

A fantastic friend and fellow enthusiast put together this nifty little setup consisting of a TYT MD-380G handheld radio and a “hotstpot” which facilitates the use of the H/T’s DMR mode without having to be within range of a DMR mode repeater. I enjoyed some fun QSO’s with hams all over the U.S. yesterday with the convenience of the H/T in low power mode. I’m hanging out quite a bit on the Columbus, GA area talkgroup, which includes some linked repeaters operated by WB4ULK. I also monitor the 310 talkgroup for activity when I’m not on the Columbus talkgroup.

I half suspect that my buddy wanted to throw something at me yesterday when I told him that I’d managed to use the factory’s software to go into the radio and add a new “zone” and channel for the Columbus talkgroup in about ten minutes. That was my very first time doing any programming of the TYT MD-380G radio. The reason I imagine he was gnashing his teeth at me is the fact he told me it took him about two weeks to figure it all out and get everything working. Actually, I doubt he’s the least bit upset over the fact I was able to do so quickly, especially considering that the two weeks he spent “pulling [his] hair out” included getting the hotspot configured, upgrading the radio firmware, etc. (none of which is as simple as the manufacturers and retailers of the equipment want potential buyers to think it will be.)

Overall I’m highly pleased with the performance of the TYT handheld radio. They only run about $90 on Amazon. I also love the performance and features of the hotspot he put together, which is a Raspberry Pi driven setup with a radio/modem board attached. It works every bit as well through my Wi-Fi as it does via ethernet hookup. One of the things I’m going to try in the next few days is using the Wi-Fi hotspot feature of my cellular service as the network link for the DMR hotspot device, which will allow me to throw it in the car and use the H/T in DMR mode while I’m mobile.

There is now some discussion of adding a DMR modem to my 442.175 Gold Hill repeater, which would allow analog users to communicate with DMR repeaters and users locally — or even worldwide. More on that if and as it develops.