As much as I prefer to avoid letting my physical pains show, today is one of those days when my body says “Oh, yeah? Not today, buddy!”

I started out the day trying to finish up refurbishing the remaining two of the four cavities on this set of Motorola UHF duplexers. Unfortunately, I got this far (to the point of having the last cavity disassembled) before the hand and finger spasms got so bad that I just had to call it a day. That’s getting to be more and more common lately. It used to be that was a “worse” than average day, but lately it’s getting to be more common than average. 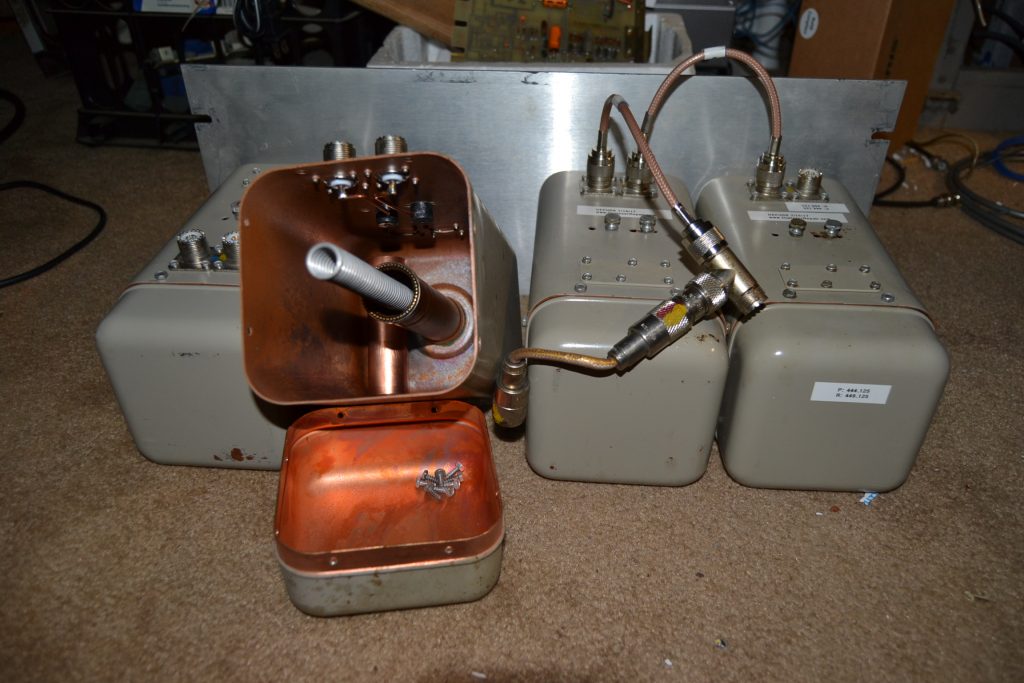 It all has to do with a hereditary disease which runs in my family (from my mother’s side) which decided not to spare me. It’s called Charcot-Marie-Tooth disease. It has nothing to do with the teeth, as the name might seem to imply. Those are the the names of the three physicians who discovered it. Family and close friends know about it, and the fact I also have fibromyalgia and diabetes piled on top of it.

The CMT (also called Hereditary Motor-Sensory Neuropathy, or simply HMSN), is a progressive disorder for which there is no cure. It affects the feet, legs, and hands most. My feet and legs started getting really troublesome about three to four years ago, but now they are going downhill much faster. The really frustrating part is that the hand and finger spasms which started about two years ago have recently become so bad at times that I am losing dexterity in both hands. That’s why I had to stop messing with these duplexer cavities this morning: I was dropping all the parts and had (not once, but TWICE) to chase the spring, washers, e-clip, and other small parts around the room because my hand kept going into horrendous spasms and I lost control of the compressed spring, allowing it and all the parts to go flying off in about five different directions.

It’s frustrating enough that there is no cure for the CMT/HMSN and it will only get worse. But to add the proverbial “insult to injury,” I have to deal with the fibromyalgia pain (for which the medication regimen is not working half as good as it was a couple of years ago and dosage adjustments haven’t helped.

Throw in the fact that at my last general practitioner visit my A1C was the highest ever (10.3) and the frustration goes up exponentially. The GP has given up on trying to get control of the diabetes, so I’ve been referred to an endocrinologist to see if he can get a handle on it. As my neurologist put it during last week’s visit, my “nerve fibers are already going downhill fast on their own, but now they’re also swimming in Karo Syrup,” which is not helping, because peripheral neuropathy is the last thing I need piling on top of the already messed up nerves.

A couple of years ago I was only having to use the walking cane occasionally. Then it became a more and more common necessity. Now, if I try to walk any distance without it (which my neuro doc gives me nasty looks if I even mention doing) life just becomes miserable. That’s why folks don’t see me showing up at the big hamfests and such like I used to. I love going, but between the extreme burning and pain in the legs and feet, the very poor balance (falls are getting much more common for me), the inability to stand in one place and maintain balance without falling, and the fact I just feel like garbage about 99% of the time now, I have a hard time enjoying the hamfests as much.

Sure, I could go the wheelchair or scooter route to get around, but until that becomes absolutely necessary and I can’t walk anymore, I just can’t seem to wrap my head around the idea of depending on either. A late aunt of mine spent the last few decades of her life totally dependent upon a wheelchair and she handled it well. My mind, however, just has a hard time dealing with the thought.

It already frustrates me to no end that the combination of the decreasing mobility and the pain keeps me from being able to work regularly. I have no way of really knowing when a better-than-average day might occur. That’s what robbed me of the ability to work on any consistent or regular basis. But with things getting even worse lately, I’m beyond frustrated. I’ve always been a very active person, having worked in various fields including broadcasting/communications, healthcare, public safety, and media. I really enjoy being around people and being active. This combination of diseases/disorders has me really concerned with what these next few years hold in store. I’m not liking it. At all. Still, I try to keep a smile on my face and be of help to others as much as I can. I suppose that’s why I love Amateur Radio and want to see others get the most enjoyment they can out of the hobby.

I suppose all of that is to say that if you see me slowing down and taking longer than to accomplish things than in days gone by, please try to be patient. I have no control over the CMT/HMSN or the fibromyalgia. As for the diabetes, I’m praying that the endocrinologist will get me on insulin or something that will start getting the diabetes under some sort of control, as none of the oral medications have worked. Despite those, my A1C has been climbing steadily for over two years and now has my doc (and me) alarmed.

I do appreciate all of my true ham radio friends beyond words. Sometimes you guys are about all that keeps me going.