The old “Engineering Mode” switch has had to remain in the “On” mode a LOT lately. All related to the the work in progress on the replacement of this 450′ 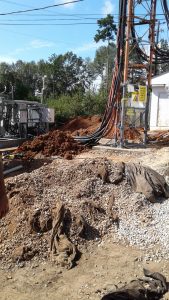 The new tower, the pad for which is just on the other side of the existing/old tower, will be within just a few feet of the old tower. The gin pole being used for all the work on the new AND old towers will do its thing solely from the new tower. 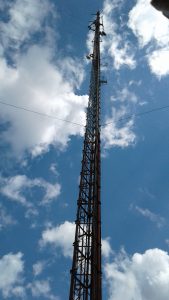 The existing/original tower was built in the 1960’s and very well engineered for its day, but they still have a lifespan, beyond which it’s time for them to be replaced or decommissioned and dropped.

broadcast/communications tower. If work stays on track and goes as planned, the new tower will be completed and all antennas, feedlines, etc. operating on the new tower by December, at which time the old tower will be dismantled and only a memory to be hauled away as scrap metal. The original/existing tower was built in the 1960’s and due to its age and general condition, it was definitely time for its successor to go up. As of now, the footings are poured with the pivot pin in place, the new guy anchors are set, and all electrical services are being converted to underground as we speak.