I’d really been wishing I had a larger second monitor for the computer which hosts the KK4ICE / East Alabama SKYWARN weather station and also serves as the main computer in the video and audio editing suite. Problem solved — on the cheap!

The 31″ LG HDTV has been a very welcomed addition to the weather station and video/audio editing computer.

A while back I was given a 31″ LG HD television with an annoying problem: after it was turned on for about 20 to 30 minutes, it would make a popping sound and power itself off. It would have to sit for a while before it could be successfully powered-on again, starting the whole cycle over. That’s a common problem with this particular model LG (and a few others) and many report having to replace one or more faulty electrolytic capacitors on the power supply board to resolve it. But that’s not how I managed to resolve the problem.

With the back cover removed to access the power supply board, I inspected all of the electrolytic capacitors and did not find a single one swollen, discolored, or leaking. 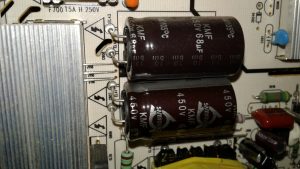 All of these electrolytic caps looked okay, and I wasn’t really in the mood to yank all of them out and (most likely) find out that the problem was a different component overheating slightly on the power supply board anyway.

There are a BUNCH of them in this thing. Soooooo… I applied the theory of Occam’s Razor, which (paraphrasing) states that given multiple possible solutions to a problem, the simplest one often turns out to be the correct one. So, did I even have to do any soldering work or parts replacement on the power supply board? Totally not.

I found an unused connector on the power supply board which has 12 Volt DC and Ground pins available. In a matter of about ten minutes I managed to wire and attach a quiet running 12 VDC cooling fan to the back of television right over a vent area in the back cover which lets air flow over the power supply board.

The television/monitor has been turned on and running for about two weeks now without fail.

So, at least in this case Occam turned out to be right and his theory saved me a lot of time and effort. That’s not to say that there isn’t some component which will eventually 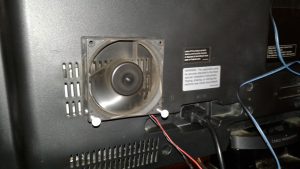 Cool little fix using a fan I’d salvaged from something else. 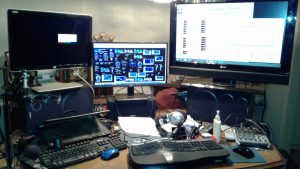 Yes, that work area is a mess. A clean desk is a sign of a cluttered mind, right? That, or a sign that there’s no XYL in the ICEman’s shack.

fail on the board which will have to be replaced; however, until it does, this baby is performing just fine.