Things have been crazy busy around here lately. Along with a notable increase in the number of duplexers coming in for tuning (some including repairs), there have been several broadcast engineering service calls. Here’s some of the fun that has been included.

Retuning of Marti STL in order to get a new low power FM (LPFM) station on the air in the Lake Martin/Reeltown, AL area 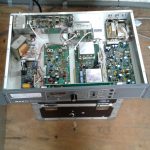 The STL link transmitter and receiver for this station had to be changed 3 MHz from its previous settings. We also had to have the tower rigger align the azimuth of the link antenna, which could not be done until the receiver front end was aligned so that we could receive the signal and peak the antenna positioning. 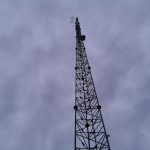 Tpwer rigger climbing his way to the STL antenna in order to peak the azimuth alignment.

Within about 45 minutes of arriving on site, the station was on the air. I checked with the station GM the next day and he said he was getting calls and messages from all over the Lake Martin area talking about how good the station was sounding and how much they were enjoying the programming.

Just before packing up and leaving the site for the above Marti STL receiver and antenna alignment, I received a call from another FM station that their Harris transmitter 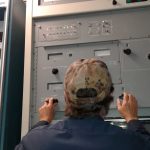 had gone down. They were running low power from a backup transmitter at another site until I could get their main transmitter back online.

The Harris Digit CD exciter was blowing fuses in the transmitter. Attempts to simply replace the fuse were unsuccessful — the would blow the second the power to the transmitter was turned on. I pulled the exciter and took it to the lab for further testing.

As it turned out, the exciter was okay. Instead, the problem turned out to be a failure in the phase detection/relay module. This module is intended to monitor for drops in either a single 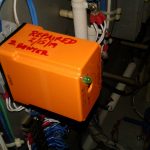 Phase detector/relay which had failed, causing power problems and transmitter shutdown. Shown after repair and reinstallation.

phase or all combined phases of AC power and for phases being out of sequence. In the event of any of these occurring, a relay will drop out and shut down the transmitter. Unfortunately, these modules like to eat electrolytic capacitors for lunch. Sure enough, the capacitor was bad. 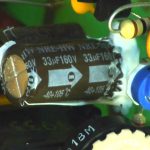 Sometimes all it takes to knock a broadcast transmitter out of service is a part which costs a few cents. Case in point: this electrolytic capacitor.

After bench troubleshooting and repair the module, it was reinstalled in the transmitter (along with the exciter) and their Harris transmitter was back on the air running full power quite nicely.

A Nautel VS2.5 FM broadcast transmitter at another station (located in the Talladega area) had suffered lightning damage to its RF combiner network and a couple of the final amplifier modules. The 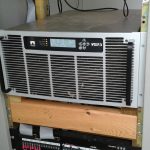 Nautel VS2.5 2,5 KW FM broadcast transmitter, just before taking it down for repairs.

transmitter was only doing a little over 500 Watts in low power mode, but is designed to be able to operate at 2.5 KW.

With tools, replacement amp modules, and other parts in hand, I set up a portable workbench and did the repairs on site in order to minimize station downtime because the transmitter had to be pulled out, turned upside down, and opened up for access to the affected circuits. 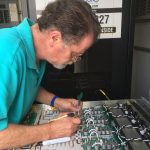 This little case of surgery had to be done slowly and carefully due to the types of soldering work involved, some damage to a combiner trace from the lightning strike, and the fact that the amp modules are static-sensitive.

About three hours later, the transmitter was back in service and they were on the air with 2,245 Watts of transmitter power. That’s not the ERP of the station — it’s only the transmitter output to the feedline.

The latest broadcast engineering call (as of this post) was for a BEXT STL transmitter amplifier which had gone down.

I received a call from the chief operator of the station (part of a large, multi-station group) that this 40 Watt Bext STL amplifier had gone down and would not power back up. He had checked the fuses and they all seemed okay. He had bypassed the amp and was running directly out of the 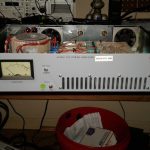 Bext PJRL40 STL amplifier on the lab bench for repairs.

On arrival at the site, I discovered that the three push-and-twist (bayonet style) fuse holders were in very poor condition. I could not even get two of the fuses and caps to re-seat. So I pulled the amp and took it back to the lab in order to replace the fuse holders and further troubleshoot the amp. 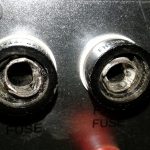 All three of the the rear panel fuse holders were in this condition.

After the new fuse holders were installed and the fuses reinstalled, the amp still would not fire up on AC power. It would 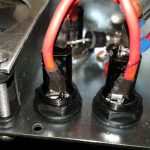 Installation of the new fuse holders required enlarging the mounting the holes from 1/2″ to 5/8″ because the new ones are much larger.

run using its 24 VDC emergency/backup power inputs, so the problem was at that point isolated to the AC power sections of the amp.

I further diagnosed the failure to the AC mains filter, which was not switching and passing AC. As it turned out, there is a fuse hidden in the AC mains filter’s AC input voltage selector. When I discovered that, as you can guess, it was blown. Neither the station nor I have 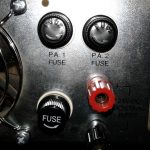 the manufacturer’s documentation on this amplifier, so we had no idea there was a concealed fuse. I had contacted the manufacture (Bext) and — disconcerting to say — they did not even recognize the model number of the amplifier. As of this writing, the latest information from Bext is that they are contacting their factory to see if they have documentation on this model. While Bext is touted for great on-air performance at lower prices than STL equipment manufactured in the U.S., it’s somewhat strange to me that they sold a system (STL Transmitter, Amplifier, and Receiver) but their U.S. tech support and engineering folks don’t even recognize the model number — yikes! 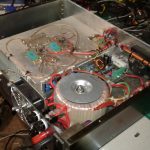 With the blown fuse replaced and the three rear panel fuse holders replaced, the amp fired up and worked just fine. I ran back up to the site and within a couple of minutes of reinstalling it they were back up to their full 40 Watts of STL power. 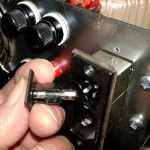 There is no external indication or labeling that this AC mains filter has its own internal fuse. Isn’t that special?

A special “Thank you” to my buddy, Jim (KD4BO) who rode with me on several of these trips to lend a hand with some of the lifting. Some of this equipment (especially that Nautel transmitter) is very heavy to lift and reposition. Best to have extra hands to avoid injury (to self, and to some very expensive and relatively fragile broadcast equipment.) 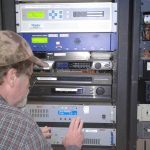 Adjusting the STL transmitter and amplifier power levels after reinstalling the amp.

Things have been virtually non-stop the past several weeks, but I love this sort of work. 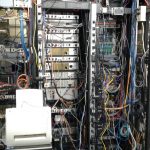 It would probably be easier to sketch out a detailed roadmap of Atlanta, GA than it would be to diagram the cabling at this site. And this is only part of the equipment in the building. Plus there are multiple transmitter buildings and other towers on the site. So many toys!

Next on the calendar: decommissioning and dismantling of an 80′ tower with a leg which is split from water having gotten inside the leg and freezing. That’s slated for tomorrow (March 6, 2019) and it’s supposed to be cold… make that VERY cold… tomorrow morning. Glad I’m not the one who has to do the tower climbing!