The Gold Hill, AL 442.175 MHz DMR Repeater got a few additions and performance improvements today. For starters, I added a combination of an EMR 5-Cavity UHF Preselector and an EMR Preamplifier to the receiver side of things. By doing so, I boosted the receive sensitivity of the repeater by 14.57 dB and at the same time gained an additional 11.96 dB of isolation of the transmit signal from the receiver. 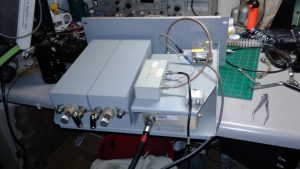 EMR Corporation combiner/multicoupler system. Since I’m not actually combining multiple transmitters, the two bandpass filters are not being utilized.

The preselector and preamplifier are subcomponents of an EMR transmitter combiner and receiver multicoupler system I had just sitting in the lab.

The five-cavity preselector tuned up very nicely, and after feeding the output of the preselector through the receiver preamplifier which was also part of the combiner/multicoupler assembly, the results turned out to be even better than I had hoped for.

For those who would like to see the actual network analyzer tuning and testing results, 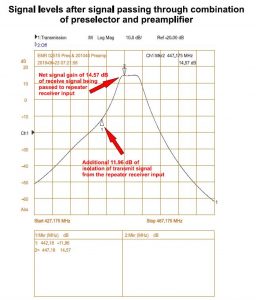 One of the network analyzer scans showing just how well the preselector and preamplifier work together.

you can click here to view the full PDF document with all the graphs and numbers as recorded by the network analyzer. You can also click on the photo to the left to open the full document as well.

Tripled the repeater’s output wattage while I was at it

Our buddy KE4COL happened to have a TPL rackmount UHF repeater power amplifier which he dug out and donated to the cause. As you may recall, the converted Yaesu 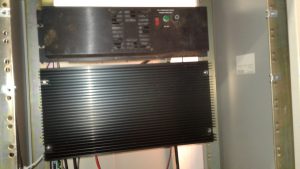 The TPL power amplifier can be seen positioned above the Mirage. I’ve never tried running daisy-chained power amplifiers like this before, but it appears these two are playing together quite nicely.

Fusion DR-1X repeater is running at about 5 watts UHF output for this operation. That is being fed into a Mirage Power Amplifier that is cranking out right at 25 Watts of output with the 5 Watts drive from the Fusion repeater. I bench-tested the TPL power amplifier and found that with 25 Watts drive it produces between 74 and 81 Watts of output power. It also has a thermostat controlled cooling fan — a very good idea given the higher than average duty cycles that DMR and digital repeaters tend to throw at their associated amplifiers. 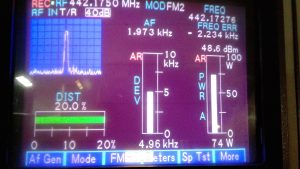 With the TPL now installed inline behind the Mirage, the repeater now has about 74 Watts of output power — triple the 25 Watts it was running up until today.

The net result: as soon as I got back to my QTH, I discovered that I was able to access the TG 31000 “Parrot” on DMR and get a good signal back from it. Oh, and to make that especially exciting is the fact that was with a handheld TYT MD-380 on LOW POWER, using the factory “stub” antenna which came with it. Prior to today’s additions and upgrades to the repeater, I had to run the H/T on high power and use an external, high-gain antenna in order to get reasonably reliable performance from the repeater.

We’ll see over the next few days how much better the repeater performs for our buddies out there with handheld radios. It’s already looking as though the changes should be quite notable.