Just a little update on what’s happening with the KE4COL 145.230 Gold HIll repeater repairs/testing, and a few other cool things going on lately. 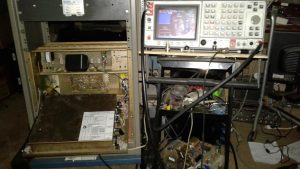 KE4COL 145.230 MHz Mastr II under test after servicing and realignment.

It keys up with excellent sensitivity and clean input and output each and every time I use duplex mode on the IFR or a handheld radio and test it. The output and frequency have been nice and stable with no occurrences of strange noises,

Output frequency of thte KE4COL 145.230 MHz Mastr II as seen on a Leader frequency counter which was calibrated here in the lab a few days ago using the 10 MHz GPSDO while locked onto 12 satellites. Can’t get much closer than what you see displayed on the frequency counter.

oscillations, squelch crashes, etc. We hope to put it back online before the weekend is out.

I’m often either testing, tuning, or building antennas. For quite some time I’ve needed to put up a mast of some sort which can be tilted over for antenna mounting and change-outs, and telescoped to provide adjustable and adequate height for any given antenna. I have a mast which mounts on a tilt-plate and will telescope from a collapsed height of 20′ up to approximately 35′. The trick is coming up with a suitable location and means of securing it when it’s in the upright and telescoped position. We’re bouncing around a few ideas, ranging from locating it 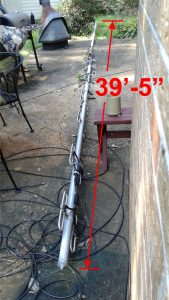 Telescoping/tilting mast with DB-420 antenna attached. This would be the maximum anticipated load ever mounted on it.

alongside the house with braces for securing the mast and the needed winches for standing it up and telescoping it. Another option being considered is setting two very stout posts or poles in concrete with the mast sandwiched between the two posts with a pivot at about the 5′ or 6′ level.

In this photo you see a DB-420 16-element open dipole antenna attached to the mast, which would be a pretty significant test of the whole setup. The combination of the mast and the antenna measures 39′-5″ end-to-end. Keep in mind as well that the mast assembly will telescope about another 15′ using its cable and pulley mechanism.

Yeah, this one calls for some slightly serious thinking and planning. It will also call for some serious posts, rebar, digging, and quite a bit of concrete if we decide to put the mast up for use. The show-stopper might be the cost factor: I’m not certain I’ll ever be able to gather the $$$ for the materials needed to do it right. It’s not a dead project by any means, but it’s also not guaranteed to ever happen. I suppose time will tell. Meanwhile, on a slightly more manageable scale (on multiple levels)… 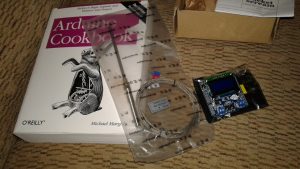 Controller board and temperature probe for the reflow oven. He also gifted me with about a 700 page, information-packed book dedicated to Arduino projects (he knows I’m also into creating all sorts of stuff using Arduino processor boards, accessories, and code.)

A special “thank you” to a buddy and fellow ham who knew I intend to build a solder reflow oven by converting a toaster oven for the job. He stopped by and gave me a special controller board designed just for such projects, along with a high-temperature thermometer probe ideal for the job. Now, I just have to find the right used toaster oven.

It can’t be the slow heating type with cheap resistive elements. It needs to be able to create pretty quick rises in temperature in order to meet the reflow curve requirements of a variety of solder pastes. When completed, the reflow oven will be used to solder all of the surface mount components onto a circuit board (or multiple 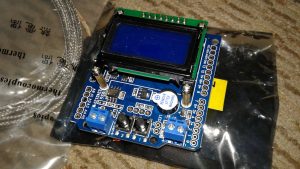 This little controller board designed to be the brains of a reflow oven is a nice piece of design work.

circuit boards) at one time — just apply the solder paste, position the components, load the boards in the reflow oven, push a button, and watch the process run. I enjoy designing my own circuits and boards, and the reflow oven will be a very cool and timesaving tool, especially for creating and assembling multiple boards in a single run.

So that’s pretty much the rundown of what’s been happening around the shack project-wise this week. Episodes of pain and immobility tend to impede projects and progress much more than I care to admit sometimes, but it is what it is. I really don’t know what I’d do without being blessed with a few great friends who understand the health situation and are so generous as to try to help me keep making some cool things happen.