A case of “Well, that didn’t go quite as planned”

KE4COL and I met at the tower site Saturday morning to put the 145.230 Gold Hill machine back on the air and discovered a desense problem. Yes, a bit of cussing ensued, but not at one another — just in general, shared frustration. So I hauled the repeater and duplexers back to the lab.

I spent the weekend testing and working on the equipment. Included in that was the replacement of all six Johanson trimmer capacitors in the duplexers, as it appeared we 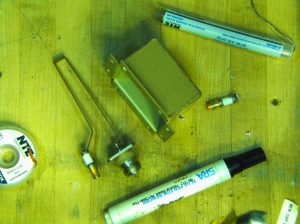 Loop and capacitor assembly removed from enclosure, ready for the cap to be replaced. There are more photos of the process at the bottom of this post.

might have lost one during the recent thunderstorms (we’d lost almost 14 dB of isolation in one branch since I’d tuned and tested them thoroughly back on June 15th.) I love the way a set of duplexers using these capacitors works — when it’s working. But they’re also relatively fragile, and I hate it when one goes out in one of our repeaters. Typically, if I replace ONE capacitor in the set, I prefer to replace them all. At $20-30 each for the genuine capacitors, that ain’t a cheap maintenance/repair job (especially on a six cavity set.) Nonetheless, if you own duplexers with Johanson caps, it isn’t usually a matter of “if” one will eventually bite the dust — it’s “when.” Just the nature of the beast.

I also had a brainstorm Friday evening which might explain why users of this 145.230 Mastr II repeater can occasionally faintly hear the audio from the 88.7 broadcast transmitter on the 145.230 MHz output signal of the machine.

There are two FM radio broadcast transmitters colocated with the repeater: 94.3 FM and 88.7 FM. The 4th Order Intermod product (2A-2B or 2B-2A) of those two frequencies is 11.2 MHz. That frequency might sound very familiar to fellow Mastr II fans: it’s exactly the IF frequency of a VHF Mastr II. It appears that we are intermittently getting this intermod product at the site (or inside the repeater — possibly in the final P.A.) and it is being demodulated by the machine and mixing (faintly) with the desired audio in the repeater. Such problems can sometimes be very, very difficult to track down to the source, but we’re going into detective mode in order to address and remedy the situation.

We’ll keep you all posted on the latest status, but seriously hope to have the machine back online in short order and working even better than it has over the past few months.

Scroll down a bit if you would like to see a few more photos of the process of replacing the Johanson capacitor in one of the six loop assemblies/enclosures on the set of Decibel Products DB4062 VHF Duplexers. 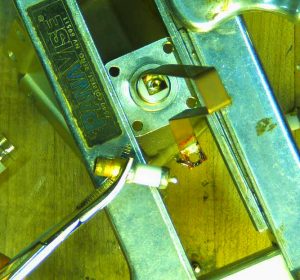 Removing the Johanson capacitor from a DB4062 duplexer loop assembly. 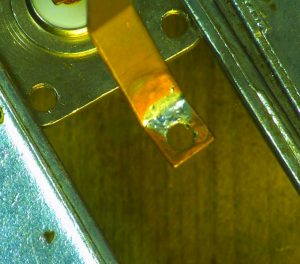 Capacitor removed and old solder and flux cleaned off. 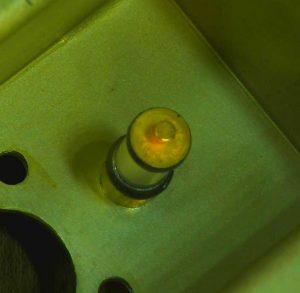 New Johanson capacitor installed in enclosure assembly housing with retaining nut, ready for loop and N-connector to be reinstalled prior to soldering the loop to the capacitor. 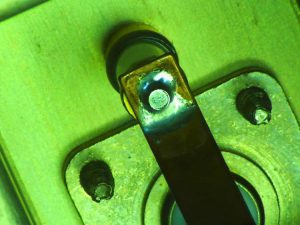 Extreme caution is necessary when soldering on these Johanson (or similar) precision trimmer capacitors. Too much heat and the capacitor will be destroyed. Too little heat and you have a bad solder joint. It’s a bit tricky, because the long copper loop acts as a great heatsink, making this soldering job one that should not be undertaken by anyone who isn’t very confident of his/her soldering skills, lest a new $30 capacitor end up going into the trash can. 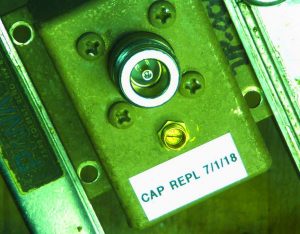 Loop assembly repair complete and back in the loop enclosure, ready to reinstall on duplexer cavity.