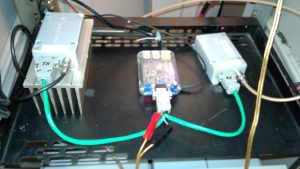 I wasn’t sure when I’d be able to do so due to increased physical limitations lately, but with some assistance from a wonderful friend (“Thank you, KD4BO”) I was able to put the temporary replacement DMR repeater setup online at the Gold Hill, AL site yesterday (July 24, 2018.) This is an interesting repeater setup because it’s actually built using two shirt-pocket sized Midland SD-250U2 data/telemetry radios. It is operating on the 442.175(+) frequency just like the Yaesu Fusion DR-1X was before it went down for a second time (personal rant: this time it went down with failure of the final and other circuitry while running only 5 Watts, which has me more doubtful than ever about the reliability of the original series DR-1 repeaters.)

Those of us enjoying using this DMR repeater can thank our (sadly) late friend, Frank (N4TKT/SK) because the Midland data radios were brought to me few days ago of a few final 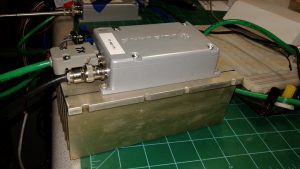 Midland SD-250U2 two-way data/telemetry radio, programmed as the 442.175 MHz transmit radio for the DMR repeater. Mounting it on a section of salvaged Mastr II PA heatsink keeps the radio temp down around the 92 degree range during high duty cycle use (it was reaching 120-140 degrees prior to adding the heatsink.) It was worth the 20 minutes it took to mark, drill, and tap the heatsink so that the radio could be firmly attached to it using four M6 sized bolts (also salvaged from a scrapped-out Mastr II.)

leftover items which were being cleared out of his former communications shop in order to make way for a new tenant. Yes, our buddy Frank is still contributing to the enjoyment of Amateur Radio in our area, even though it has been a year or so since his life ended under such tragic and needless circumstances. I suppose he will be for quite some time, as he gifted several of us “hams” with a wide variety of cool and useful stuff back when he was shutting down the two-way part of his business in order to focus his attention on his broadcast engineering work, which he was one of many things he was highly regarded and respected for.

This repeater setup is only intended to be temporary, as we are hoping to have the Kenwood TKR-850 here soon. That machine will be wired up and become the permanent KK4ICE 442.175(+) DMR machine. When that happens, these radios and the special wiring harness will be set aside and designated for backup purposes in the event we ever have trouble with the Kenwood.

I would like to throw in a special “Thank you” to the folks at Midland, which were helpful enough to point me to a source for the programming software for the Midland data/telemetry radios, and for further providing me with a schematic for the 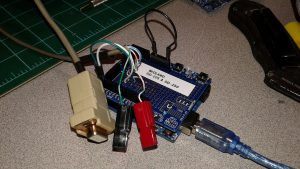 What better use for an Arduino Uno R3 with a flaky Atmega chip than to utilize it as a USB/Serial converter? There are three ways to force it into that mode, the easiest being to just jumper the RST (Reset) pin to GND (Ground.)

cabling necessary to program these nifty little synthesized radios. Not having $50 to spend on a special programming cable for the radios, I used an Arduino Uno R3 strapped into USB/TTL converter mode (the Uno uses the FTDI communications chipset) along with a $2 Uno-compatible prototype board, a salvaged 9-pin Sub-D connector, a couple of PowerPole connectors, and a cut off piece of CAT-5 cable to quickly throw together a USB/serial interface cable. Just by the way, Midland’s software for programming the SD-250U2 and SD-225U2 radios runs beautifully on Windows 10 — a welcomed discovery. 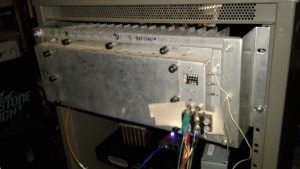 The repeater is currently operating at about 90 Watts transmitter power. The transmit Midland radio is set on low power output, producing 1.25 Watts. That is in turn being fed to a Motorola Micor UHF Power Amplifier producing a respectable 90 Watts of Tx power into the EMR Corporation duplexers. The controller being used for the repeater is still the STM32_DVM running on the RPi — the same controller setup which was running the Fusion, and which will be used to externally control the Kenwood TKR-850 as a DMR machine when it arrives.

Sidenote of special interest to anyone considering using one of the Micor UHF power amplifiers for a DMR or other high duty cycle machine: while it’s highly recommended that you cut the power back a bit and control it using the voltage applied to the CTRL line on the amp (it should be around 5 VDC) for use at high duty cycles, if you reduce the power output by more than a few Watts, be sure to look at the output with a spectrum analyzer, because these amps are notorious for producing all sorts of spurious noise at frequencies where you don’t want to be transmitting anything — at significant power levels — if you attempt to crank their output down very far. 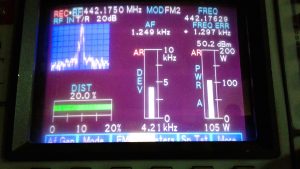 During testing, the Motorola amp was doing 105 Watts of power, which I turned down to 90 Watts for operational use.

repeater, the Motorola power amp’s 90 Watts of output means that handheld and mobile DMR radios now receive a strong enough signal back from the repeater to facilitate synchronization at even greater distances from the repeater than before. As those of you familiar with DMR operation know, digital DMR repeaters behave differently than the old analog FM repeaters. Analog FM machines usually have some element of imbalance between their receive sensitivity and their transmit power, which typically results in an analog machine having either good receive but weak transmitted signals — or the other way around — once you reach certain distances from the repeater or encounter certain

500 Ohm, 50 Watt rheostat installed for tapping a proper voltage from the higher voltage A+ for the CTRL line of the Motorola power amplifier.

terrain issues. DMR acts differently because when a user hits the PTT button on his or her mobile or handheld radio, if the repeater hears it, it sends back a confirmation/sync burst which the user’s radio must receive with sufficient strength for the radio and the repeater to “handshake,” so to speak. Otherwise, the radio emits an error tone and processes the attempt as “transmit denied,” in which case their radio will stop transmitting after the series of attempted sync bursts and they won’t be transmitting anything through the repeater. With DMR, gone are the days of folks constantly keying up the repeater and throwing out their callsign or trying to reach another user over and over, unknowingly “doubling” with other users because they aren’t receiving enough 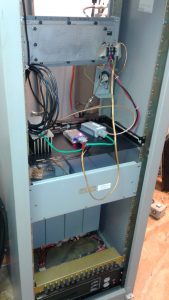 signal from the repeater to hear it and realize that someone else is currently talking on the machine. On the other hand, users with the repeater programmed in their mobile or handheld can decode and hear the output of a DMR repeater if it has much better transmit than receive range, but they won’t be able to actually key up that particular repeater with DMR because the repeater wouldn’t be able to receive and decode the weak incoming signal, so no acknowledgment/sync burst will be sent back to the user’s radio — hence, they would get that before mentioned “transmit denied” or “not allowed” error tone (and possibly a displayed message to that effect on their radio, depending on the make and model of DMR radio they are using.

Thank you all again for your patience as we go through a hiccup now and then with the Gold Hill DMR machine. We are all learning a few tricks and coming up with ideas and trying things in order to make the Gold Hill DMR machine increasingly more reliable with improvements in coverage area as well. It’s definitely a new kind of adventure for many of us in the area. Most of all, it’s an adventure which would not be possible without the assistance of a few other hams in the area who have generously contributed resources including but not limited to 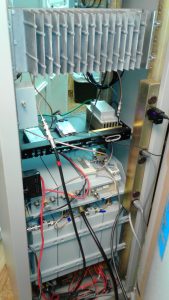 time, money, system components, gas, and ideas, One or two of them have also been kind enough to listen to an occasional swear word or two (okay, maybe several) when things didn’t go as planned or failed.

If you are considering using a Yaesu Fusion as a DMR machine, from personal experience, I have to say I don’t recommend it. It’s not just a “DMR” issue — it’s also a matter of overall reliability and several quirky issues I’ve heard reported by other users of the Fusion DR-1 series repeaters (and users of the FTM-400 as mobile radios as well.) Perhaps there is some validity to not expecting top-notch performance when a manufacturer takes two $800 or so radios, adds a controller, switching power supply, case, and other hardware and markets the thing to ham clubs/repeater owners for under 500 bucks? If it sounds too good to be true… well, we all know that saying. The folks at Yaesu might not be pleased if they heard me say it, but I feel as though a bunch of “iffy” repeaters which still needed some redesign, engineering refinements, and other improvements were dumped at highly discounted prices to a lot of hams and clubs as part of a marketing ploy intended get Fusion repeaters out into the field and in turn promote sales of lots of the same manufacturer’s C4FM/Fusion series handheld and mobile radios and accessories. That is my personal opinion, so please take it as such and with the proverbial “grain of salt.” Still, it is my sincere hope that users are finding the subsequently released DR-2 series of repeaters to be much more reliable and agile machines, although I’m hearing stories from many that they have found no way of implementing DMR or other digital modes on the DR-2 series (something to do with the inability to implement the external controllers necessary to make it work.)

To close on brighter note, I hope many of you are enjoying the Gold HIll, AL KK4ICE DMR machine being back online with this temporary setup while we eagerly await the anticipated arrival of the Kenwood machine. I’ll try to keep you all posted on the status of that, time and health issues permitting. As mentioned in other posts, timeslot 2 on this repeater is reserved for the 310023 East Central AL DMR Talkgroup CC1), and timeslot 1 is statically linked to the 311342 WB4ULK/Columbus, GA area talkgroup (which is in turn linked to a bunch of different repeaters including analog, Fusion/C4FM, D-Star, and AllStar linking nodes.