The KE4COL 145.230(-) Gold Hill / Auburn, AL repeater is back to running on a Harris Mastr III machine. I spent Saturday, 2/9/19 reconfiguring, reprogramming, and realigning 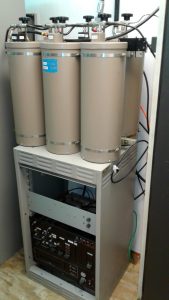 this machine for Lee (KE4COL) and he transported it to the repeater site and fired it up on Sunday, 2/10/19. There were a few audio drive/distortion issues on initial start-up at the site, but I went and cleared those up within a couple of hours and now it’s running great and sounding great.

A little history on this repeater serving in this role

I had previously performed the conversion work to bring this machine down to the 2 Meter Amateur Radio band and it ran at the site for a little while with an external controller, linking with my UHF system (which has since been converted to DMR), specially designed custom output CTCSS circuitry for AllStar linking purposes, etc., but we just were not enamored with the way everything sounded. But the reconfiguration to simpler, stand-alone repeater operation utilizing the internal controller and ID functions has it sounding like a Mastr III should, thanks to the really nice DSP and compression/limiting circuitry which the Mastr III is well known for.

Replacement of a previously replaced capacitor in the RX Synthesizer Module

At the time of the original conversion a year or two ago, I had removed a couple of surface mount capacitors in the RX Synthesizer Module and replace one with a different 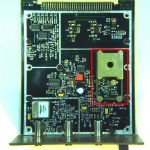 value (necessary for the Synthesizer’s Local Oscillator (LO) section to operate in the range needed for 2 Meter band. Unfortunately, at that time I did not have the recommended 6 pF surface mount capacitor, so I had tried a couple of higher value caps in series, resulting in capacitance of about 8 pF. Since that time I have increase my inventory of SMD capacitors to around 10,000 pieces (including less common values such as 6 pF), so I decided to go ahead and change that replaced capacitor to a true 6 pF. Being an 0805 sized surface mount component, that little task was an adventure, as are all really small surface mount devices.

With the new capacitor in place, I went back through all of the tuning and alignment and got it prepared for Lee to haul to the site and put into operation. Unlike the old Mastr II 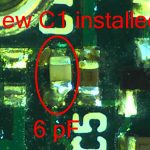 machines Lee has used for the 145.230 machine over the years, most of the alignment settings, audio and modulation 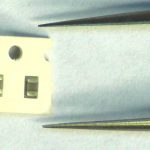 0805 size capacitors are not the smallest they make, but they are small enough to create some adventures in soldering work.

adjustments, etc. on the Mastr III are software controlled instead of being mechanically adjusted components. So when Lee fired the repeater up on Sunday and we discovered audio distortion, I had to grab the laptop with the GE/Harris software and make a quick run to the site to do some tweaking. Fortunately it didn’t take long to have it sounding really good. The repeater is getting great on-air reviews and should provide years of service.

One of the advantages of the Mastr III vs. the older Mastr II repeaters for use as the Gold Hill / Auburn machine has to do with the machine’s IF frequency. In the past, the 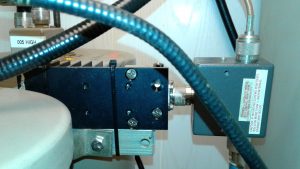 Isolator and load attached between the power amplifier (PA) and the Tx branch of the duplexer assembly.

Mastr II repeater(s) used for this repeater setup had been plagued with audio from one of the two commercial FM radio broadcast transmitters somehow making its way into the repeater and mixing with the transmit audio. It was worse at some times than it was at others. Lee had tried additional grounding and such but the problem would not go away. Then one day I had a little epiphany and grabbed the calculator. As it turned out, the two broadcast transmitters at the site (94.3 MHz and 88.7 MHz) produce a fourth-order IM product (2A-2B) of 11.2 MHz. Oops! That’s EXACTLY the IF frequency used in the Mastr II repeaters. Once I figured out that we most likely had both FM broadcaster signals blasting their way through Lee’s antenna, transmission line, duplexers, and mixing in the PA (thus producing a mixed IM product of 11.2 MHz) which was coupling right into the IF section of the repeater and mixing with the desired repeater transmit signal so it became part of the transmitted signal) I put together an isolator and load and had Lee go install it between the PA and the transmit branch of the duplexers. The Intermod problem was eliminated and no more broadcast FM station audio going out over the repeater. 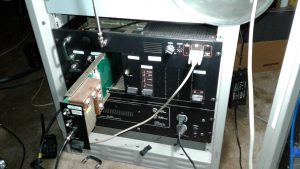 Rx Front End Module mounted on extender card to facilitate fine-tuning of the five helical resonator coils which give the Mastr III selectivity which is comparable with its predecessor, the Mastr II series.

The whole system is working great as of this writing and — barring something unexpected such a lightning hit, component failure, etc. — it should continue to work great for a long time.

If you’re anywhere in the East Central or Central Alabama area, you’re invited to try hitting the repeater. It will also have AllStar linking turned on again soon (if Lee hasn’t done so already) so AllStar users can also look for KE4COL in the AllStar database and access the machine that way in order to enjoy QSO’s with other users of the repeater but can’t quite make the RF trip to get into the machine.